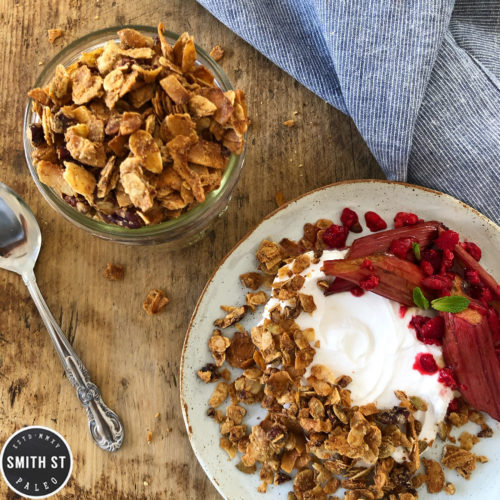 So my mum pinched this recipe from my auntie, and I flogged it from my mum, gave it a little spit and polish, and now its mine. Finders keepers and all that.

I used to love granola as a kid, but I used to meticulously pick out the sultanas like a little weirdo. I hated them. I think my sister told me they were rabbit poo and that was that, game over. I also hated peas with a passion. Mum used to make me sit at the table until they were gone (parenting 101). I deadset used to hide them in my knickers so I could be excused, then flush them down the loo. Desperate times.

This granola is so delicious I almost had to resort to my old ways of stashing food in my pants to get my share in this house. Luckily this recipe is bloody easy to knock up every couple of days and a piece of cake to double the quantity. And I didn’t add any sultanas for old times sake.

Mix together dry ingredients in a large bowl.

Fold in wet ingredients until everything is well coated.

Spread mixture on a baking paper lined tray, trying to get it evenly spread.

Bake for 30 minutes. I usually give it a little mix around at the halfway point to prevent any over browning.

Let it cool. It gets crunchy on cooling.

Store in an airtight container.